The choreography “Naj” refers to the situation in our society where we need to fulfill inexpressible requirements or create certain images which are written down by mass media in the beauty canon. Flawless beauty, perfect housewife, invincible strength, super husband…As a result of this pressure, we are getting lost and we lose our identity-whatever that means to us-manhood, femininity, what makes us unique… We witness the fall and are passive, even when we fall again…Do we have courage to be individual?

By the way, “Naj” read backwards gives Jan. Jan Szczepanik (1872-1926), Polish inventor. Many of his patents are still applied today, especially in the motion picture industry, as well as in photography

and television. Some of his concepts helped the future evolution of TV broadcasting so the development of advertisement which has a huge impact on our appearance and consumption.

Wiertelak Sebastian_Icarus, who has stolen the sun

Icarus is searching for oneself with the help of the senses that surround us. The project shows the start of a long road on which we try to overcome our own fate and misfortunes prepared by fate. The proverbial creeping of the sun is a symbol of self-struggle. It is thanks to understanding ourselves, accepting and remaining alone that we are able to find a goal. Just want and everything becomes possible. It’s easy.

Laureate and winner of the 2nd individual award of the choreography competition 3 … 2 … 1 … DANCE at the Krakow Choreographic Center of the Nowa Huta Cultural Center on 23/03/2019. as a choreographer and contractor of the project “Icarus, who has stolen the sun”

/I am Milagros, I wear flashy red skirt and dance in fancy discos, screaming out “mi corazon” and

“cambio dolor”-then I feel loud and strongly present in my pain.

I am Krystyna, humility, sensitive, forgiving woman, with a soothing touch and steadfast calmness-

Choreography is my reflection about cultural body in a pain and sadness. Flamenco as a

Winner of the Grand Prix Award for solo “Krystyna in flamenco mood” from the Organizer of Choreographic contest “3 … 2 … 1 … DANCE!” 2019 in Krakow. In this competition, she also received the first prize from Anna Godowska, the first prize from Assen Assenov and the material prize from Agata Moląg (KCC). She also received the distinction in the choreography contest “Tradition. Transgressions” during the Open Stage Festival 2018 in Tarnów. She was also a finalist of the Solo

In this short spectacle the motherhood is understood as ambiguous stage in woman life full of conflicting feelings, emotions, needs and thoughts. Bipolarity was a task for seeking movements. Obligation versus desire, sacrifice versus consummation, fear and tiredness versus strength. Roman Polański’s movie „Rosemary’s baby” had a big impact on the piece.

Magdalena Widłak for solo „La la la la la” has received many awards: the prize in the 9. Entree Artistic Observatory 2018 ; the first place in the professionals category in the Choreography Competition „Sense of Move” in International Theatre Dance Festival Open Stage in Tarnów 2015;

the prize in National Monodrama Days – Debuts of the „North Arrow” in Koszalin 2014 ; first place in the Open Stage of the Warsaw Dance Platform 2016

Among the questions posed by the author are those about the roles that women agree to play in the modern society. Why do we agree to play them? Are they certainly comfortable for us? Why do we reach for such roles instead of others? Where do they come from? Do we have an impact on what roles we want to create for ourselves NOW, or can we critically look at the traditional ROLES we play for our partners, parents, children, friends, families, neighbors, politicians… Where in all this do we find the crux of our being as women?

Music for choreography “Sola” was composed by Ben Frost and Daniel Bjarnason at the request of the Unsound Festival in Cracow in 2010. The inspiration was “Solaris” by Stanisław Lem and Andrzej Tarkowski’s film of the same title from 1972. In this story, the key is the role of the woman who is but as if she didn’t exist because taken out of context of being a wife and being physically present she escapes the framework and becomes a quantum presence. The music is intentionally mismatched, uncomfortable, illusive and at the same time the strongest present. One reviewer wrote: “it’s like feeding a blind person a grapefruit for many years and suddenly giving him a lemon instead of a grapefruit.” Ben Frost said that this sense of loss was most evident to him in “Solaris”. During the creative process, Anna questioned this sense of loss from a woman’s perspective – a loss of herself, one of her roles, one of her illusions, the loss of her own presence in favor of roles that take over our existence and become a projections, a quantum presence.

“SOLA” received the first place in the professionals category in the Choreography Competition „The Essence of Motion” on International Theatre Dance Festival Open Stage in Tarnów 2017. 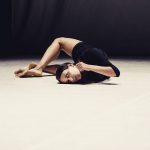