“Action” is inspired by Sam Shepard’s drama of the same name.

GGK interpret the drama using dance, music and rhythm, video, sampling fragments of the original text and its translation. The viewers will briefly enter into the house situated at the frontier of the civilized territory. Four characters await a holiday dinner. They are in a state of hightened emotional activity, torn in disconnection between their outer and inner beings.

When Shepard’s drama opened in 1975 in New York it was almost universally dismissed as inaccessible and too absurd. Yet less than ten years later it would be hailed as “one of the most richly textured, tightly constructed, passionately engaged and intellectually provocative plays of the 1970s” (Ross Wetzsteon). Shepard analyzes the moments of crossing between extreme states of the self and examines “the gaps between action, meaning, and self” (Wetzsteon). Underneath a seeming static the drama pulsates with the characters’ intense, engaged presence in the moment and their spiritual absence.

In “Action” GGK try to deal with the inability of escape from one’s blood, from one’s inherited identity. What happens if we decide not to be determined? 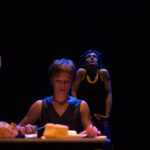 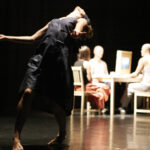