The world is a zoo of lost souls. The characters are half human, half animal. It is a series of images in which irritating and humorous moments coexist side by side.

The Swiss  repertory company drift is an ensemble that examines the absurdities of everyday life.

Company Drift sets out to exhibit profound surrealism with a seemingly effortless ease. The resultant effect can be as unexpected as it is at the same time absurd and disturbing. Every simple pose, every simple gesture, no less than the work as a whole, provides a basis for constant movement and have become the instrument for the specific and very personal signature of company drift.

Company Drift communicates in a series of densely packed atmospheric tableaux which blend tragedy and comedy. In this manner the magic of the dance is revealed in a multitude of unforgettable images. It is very seldom that a dance company like company drift can, at one and the same time, make its audience laugh and yet provoke deep reflection.

The artistic directors, Béatrice Jaccard and Peter Schelling have worked together since 1987. In 1992 they formed company drift. They have received the Swiss Award for Dance and Choreography 2007 for their complete works. 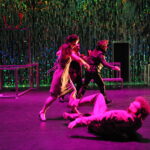 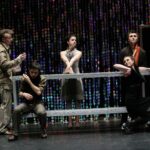 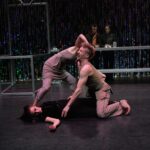