Café Müller was originally the title of a four-part evening, whose premiere took place 40 years ago, on the 20th of May 1978. In addition to the choreography by Pina Bausch, which is still regularly performed today, this evening originally comprised work by Gerhard Bohner, Gigi-Gheorghe Caciuléanu and Hans Pop. Together they agreed that each of them will create a performance that will include the following elements: a café, darkness, someone falls, someone lifts, a red woman enters, everything goes silent.

Café Müller by Pina Bausch is a story about loneliness, isolation, unrequited love, grief and despair. The performance is moving, because it tells about issues that are close to everyone, iconic, because it can be used to explain what Tanztheater is, unique because Pina herself performed in it. For me, it’s simply brilliant.

My Café Müller is a fanficiton. Basing on the existing performance, its world and characters, I create images referring to my personal story. Born in Iserlohn, a small town in NordrheinWestfalen, Germany, and raised in Poland, I have been asking myself: what would happen if my parents had not made the decision to return to Poland. In search for an answer I let my imagination run wild and created hypothetical scenarios, traveling around Germany, around my hometown, researching the German language and meeting Polish artists who live there. This performance, however, is not a linear story about what could have happened. It’s not writing a new script about some alternative reality, but sharing of the emotions that accompanied me when I once again asked myself: what if? 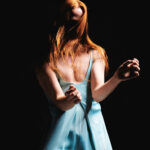