The characters of Daphnis é Chloé, whose ancient origins, born from a Greek tale attributed

to Longus, have come to us mainly through the music of Maurice Ravel written in 1912 for the Russian Ballet, in which Nijinsky triumphed in the title role.

When, in 1982, a few months after his ballet Ulysse, Jean-Claude Gallotta presented this “pas de trois”, he was less concerned with the story (Chloé, wife of the young shepherd Daphnis, kidnapped by pirates, is brought back to him by a miracle performed by the God Pan) than with working on the movement and capturing the energy, gentleness and violence of the battle of love.

Created for the Avignon Festival, performed at the time by Mathilde Altaraz, Jean-Claude
Gallotta and Pascale Gravat, set to music and played on stage by Henry Torgue, this

choreography moved people by its ability to combine the cerebral and the animal with humour and the joy of the senses. It was given an enthusiastic welcome by the press: “a small masterpiece” in Libération; “one of the finest things we have seen” in the Nouvel Observateur; “the essence of loving relationships” in Le Monde.

Jean-Claude Gallotta is keen to sustain the repertory of the National Choreographic Centre in Grenoble, and after recreating Ulysse, which became Cher Ulysse in 2007, he has now chosen to direct three new, young dancers and give new life to Daphnis é Chloé, this intimate, free, sensual, fun, wild and mischievous piece (even down to the title, in which the “é” respectfully cocks a snook at the initial work). 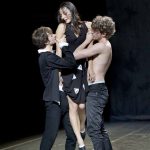