Arno Schuitemaker _ If You Could See Me Now

Arno Schuitemaker created „If You Could See Me Now” to interrogate how to deal with things when they are taking another turn. How can we shift and realign our focus? From ecstasy to turmoil, from a meticulous build-up to its fracturing, „If You Could See Me Now” plays with expectations and redefines them. Moving through the unsettling, performers and the audience alike arrive at something unreserved and unbounded: a liberation.

In 2019, „The Way You Sound Tonight” was bestowed with the award of most impressive dance production in The Netherlands. Critics listed both „The Way You Sound Tonight” and „I will wait for you” as the season’s best performances in Theatermaker. In their yearbook of 2017, tanz ranked Arno Schuitemaker as one of the most promising artists and Dance Europe has mentioned him as being “one of the leading dance makers in The Netherlands”. He also is a winner of the Dioraphte Encouragement Award and the 2nd jury prize at [re]connaissance. 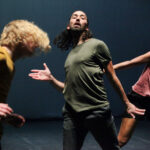