In Joseph there’s a man on the stage, alone, with his back to the audience for the entire length
of the performance, seeking his own image in everything his eyes touch.
The creator of the performance, takes his name from the one who accepts to become father to
the man who hides in himself the Divine: we cannot know who Joseph is, or where he is. We
do not know whether he is the man on the stage or the one who’s unfamiliar eyes, by chance,
happen to be part of the system of representation. The solo stops being an event performed
by one and becomes full of astonished eyes, distorted, doubled and amplified. Of bodies
exposed and ready to be exhibited, out there, somewhere, on the other side of the world, but
at the same time.
Fiat lux: like the top hat of the magician, granted the authority to generate white rabbits.
In Joseph, Alessandro Sciarroni plays live with Chatroulette, a social network that puts into relation people of all over the world in a random way. It is possible that scenes sexually excplicit appear.
Promising revelation, Alessandro Sciarroni is an upcoming artist that, in neither a gratuitous
nor weird manner, uses the simple installed technology of his computer to record and return
behind him on the big screen, his image multiplied, symmetrical, flipped, reciprocal, or through
deformed details, revealing us its totally unusual, expressive (and compositional) possibilities.
He, solitary performer of him self and his fantasies, doesn’t lack irony when applied to most
banal and private situations such those of a world of an erotic chat. Very funny and able to
generate expectancy for the next performance after this Joseph, a kind of alter ego that gives
the title to the show (co-produced by the Stabile Theatre of the region Marche). 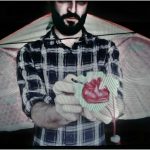 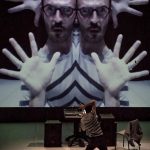