It is not entirely clear if Fred Herko planned to finish his intimate performance with a suicide death. He took a bath, turned on Mozart’s Coronation Mass and began to dance naked in his friend’s living room. He approached an open window several times. When Sanctus resounded, he ran and jumped out the window of the apartment on the fifth floor of New York’s Cornelia Street. Ballet dancers are said to believe they can fly. And indeed, suspended for a second in a jump, they do.

Paweł Sakowicz is a choreographer and dancer. He graduated from the University of Warsaw with a degree in political studies and holds an MA in performance and choreography from the London Contemporary Dance School. His works include Bernhard, TOTAL, Jumpcore, Thriller and Masakra. They have been presented in two editions of the Polish Dance Platform, NYU Skirball and CAC New Orleans amongst others. Aerowaves Twenty19 Priority Artist. 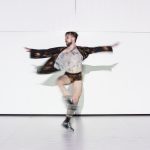