From the review of the performance „Kontakthof”:

„Kontakthof” can be understood as a „meeting place”. The setting of the show is a dance room where a group of men dressed in loose suits and women in cheap cocktail dresses desperately try to show tenderness to each other by playing a sarcastic game in the deformed world of social relationships. Popular and sentimental German songs from the 1950s, jazz, and tango form a musical background, while men and women with straight faces remain full of hope of finding happiness in flirtation and romance. Romp (…) gives an absurd result.
★ ★ ★ ★ ★
Nancy T. Lu, The China Post, March 2001

Protagonists of this piece are people getting ready to meet – adjusting their personalities and outfits, hoping for romance. The dance hall is an apt Bausch metaphor for the way people try to please others and satisfy their innermost desires. (…)
As usual, Bausch offers a strict and formal structure for his drama. It is by repeating a scene and placing it in a different context that the emotional resonance often comes to the fore.
★ ★ ★ ★ ★
Anna Kisselgoff, New York Times, September 1985

When Pina Bausch became the artistic director of the then Wuppertal Opera Ballet in the early 1970s, she decided to abandon classical ballet in order to create her own special form of interaction between dance, movement, speech, costumes and set design. The dance theatre she created was completely different than the ballet staged so far. From the very beginning, the dancers distinguished themselves as individual characters, telling their stories, dancing, singing, talking, and sometimes laughing and crying on stage. (…) interpersonal relations and gender quarrels play a significant role in the work of the Theatre. In this way, Pina Bausch made a revolution in the performing arts that permanently changed the evolution of theatre, classical and contemporary dance, and influenced the work of an entire generation of choreographers.

With her credo „to find the language of life”, Pina Bausch not only invisibly expanded the expressive potential of dance, but also fundamentally changed the art itself. In this sense, her works also change – not only with each performance, but with each new cast. The fact that most of Pina Bausch’s performances are still performed in Wuppertal and around the world on numerous tours is due not only to their thematic and aesthetic timelessness, but also to their long-standing practice of passing them on to successive generations of dancers. Since the death of Pina Bausch in 2009, her performances live in the dancers of the Tanztheater Wuppertal.

A fragment of the film “Lebensraum in Gefahr” [“Habitat at Risk”] by Theo Kubiak is presented with the kind consent of the author and Radio Bremen. 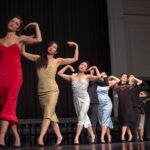 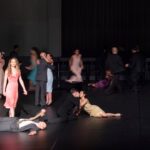 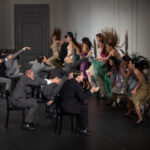 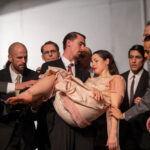