The Theatre of the Gesture and Movement _ Ofelia’s Death

‘Ophelia’s Death’ – the direct source of inspiration of the performance was ‘The Mime…’ by W. Bogusławski – XIXth century textbook for drama school graduates, which was a collection of codified gestures and theatrical poses reflecting basic emotional states such as anger, sadness and joy. It is a textbook about defunct gestures and artificial body poses which then had been a reformatory step towards psychological truth. It was the lifelessness of conventions and hollow stage forms that inspired the thoughts of a character who clashes with them on a social level and falls their victim – of Hamlet’s Ophelia, whose study was done by Bogusławski himself. This is also why a point of departure for the performance was Ophelia’s monologue taken from Bogusławski’s copy “translated” to the language of gestures from ‘The Mime….’’according to the instructions in a separate chapter on stage depiction of madness. Thus, double madness is acted out – the one of Shakespeare’s Ophelia and another one of the character of Bogusławski’s theatre. The performance subject is a psychological portrait of a character undergoing a personality split into the social, court, and feelings and instincts personalities. The death through the form, rejecting and destroying everything that is not within the convention, in this case – social and court one. 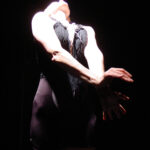 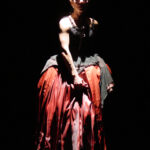 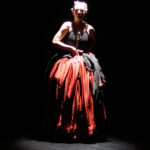