Every body has its own identity in relation to the skin. The texture of the skin changes and transforms constantly through contact with others. This applies equally to people of different abilities, different ages and even to the surface of the earth, which is shifting ever faster in the current age of the Anthropocene.
Performed by Roland Walter, a dancer with full-body spastic paralysis, and Renae Shadler, a non-disabled dancer and choreographer, SKIN creates a universe of its own in which their two distinctly different bodies can come closer to each other. This intimate duet transcends the performers’ physical borders to imagine a shared movement language inspired by sea anemones, liquids and earth’s surfaces.
SKIN explores new ways of relating to each other, deepening our ability to glide back and forth between different types of experiences and physicalises how our environment both shapes us and is shaped by us.

When Roland proposed in 2018 that we make a duet together, I was curious about how we could connect with one another. To connect as two individuals and at times even merge into one. This idea of ‘merging’ was formed especially by observing Roland and his assistants, because they were constantly working to extend his body, such as becoming his hands to feed him. This expansion is contrasted with the idea of contraction – from the beginning we worked with sleeping bags, placing a limitation on both of our bodies that enabled us to begin from a more level playing field. SKIN is not about ‘access’ for people with disabilities but rather a work of ‘excess’ that we explore with care, curiosity and wonder. It is an attempt to make a world in which there is no more or less able body. To achieve this I draw from the author, Ursula K. Le Guin and her musings on amoeba’s and how they exchange genetic information when they make love by sending bits of themselves back and forth, mutually responding each to the other. This was my final key to uniting with Roland and inspiring a movement language in which we could share parts of ourselves and ultimately make that readable to the audience. 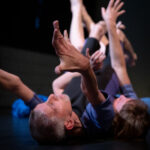