– Tell me, has our history already died?
– You know, something that is not truth in the present, will not become truth in the future.

The metaphor ‘life as a dance’ is not new, but no less fascinating.
Two are on stage. Ordinary citizens. Man and Woman, drowned in concepts. They have forgotten the difference between the right dance and their own.
A bit tired but prepared. If not for everything, then at least for this performance.
“Don’t you think we are condemned to art?..”
Admitting their presence on stage, they are trying to get closer to the audience and to themselves. Through the abundance of text, literally scattered around, and the dance, that also requires its own place to be found. On stage, and in life.
On stage as in life?
‘Do you want to dance with me or (just) with the entire world…’
‘Do you want to see the real speculation?’
But to do that, they’ll have to talk a lot. And move a lot.
Sending to the audience and to each other their rehearsed and speculative SOS signals. 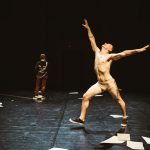 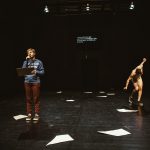 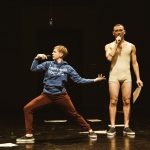 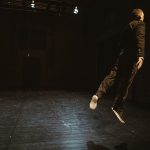