My forms are another skins, that I take off me, marking the stages of my way’
/ Magdalena Abakanowicz

„stadium” is a stage of Anna Żak (the choreographer) and Contemporary Dance Group of Lublin University of Technology dancers’ work on extensive theme of Magdalena Abakanowicz’s work, but also self feelings connected with huge body in space, real or unreal, having character of overwhelming and overpowering mass.

The initial stage of „stadium” uses more crowded form and emerging and disappearing shapes. This is only an introduction to individualization, to finding or retrieving of identity…perhaps never impossible…perhaps always present. The first interpretation is accompanied by fear of what is ‘crowded’ powerful, unavoidable and mysterious, what looms from angles of sub-consciousness. 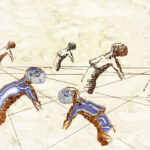