The Hero and the woman he leaves behind.
A boy that embraces a river of tears.
A girl that holds a handful of dust.
The living and the dead are fighting each other, like children playing
the warriors in the middle of a battlefield.
With the knowledge of despair and the agony of knowing.
Having as unique consolation their own evident condemnation, their
sentence to death unifies them. Two speechless bodies are facing the
body of an epic speech. Linda Kapetanea and Jozef Frucek confront the
heavy weight duty of a man’s transformation into a Hero, and a woman’s
transformation into an endless lament.

The performance, produced by Athens Festival, co-produced by Kostopoulous Foundation, Archa Theatre and the Belgian group Ultima Vez, has been described by the creators as a 50 minute battle on stage, loosely inspired by the story of the last meeting between Hector and his wife Andromache, from Homer’s The Iliad. Frucek and Kapetanea have set this battle between a man and a woman, between love and death in a contemporary context. Since the premiere in June 2007 at Archa Theatre, the choreography has met with great acclaim at international dance festivals in Greece, Czech R., France, Belgium, Great Britain, Slovakia, Slovenia, Spain, Sweden, Portugal, Italy, Korea. Performance was also selected for Aerovawes 2008. 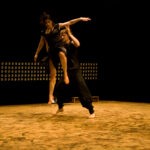 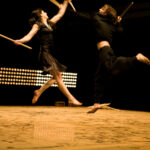 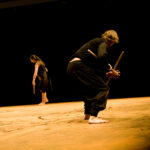 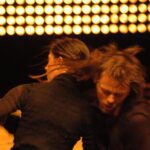