During a hot summer we meet in the only possible place. Held by the sea, we fight tenderly. This is not a performance. It is not a video. It is not a video of a performance. It is a performance in a video. A performance that has never happened, performed in an online format. It is a ruin of a performance, built in the ruins that are inside and around us now. We meet the audience inside these ruins and invite them to experience flickering realities and their multiplicity of time and spaces. What grows in the ruins? What might come out of these cracks and holes? It takes tenderness to fight for it. We meet you there. Welcome to “Tender Fights 2020”.

Ana Dubljević (Belgrade/Serbia), Kasia Kania (Danzig/Poland), Marja Christians (Giessen/Germany) met during their Masters: “Choreography and Performance” at the Justus-Liebig-University in Gießen. In the performance „Tender Fights 2020”, they have continued their studies of the body from a queer-feminist perspective, which they began together and in other constellations, e.g. as part of the christians//schwenk collective. With humour and analytical acuteness, the artists use the power of performance to queer familiar patterns of perception and customary images of the body, as they seek to draw attention to power structures. 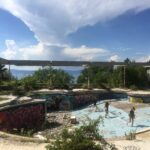