The latest production of the artists from Sopot is a metaphorical transcription of the work of Chopin – arranged for cello and electronics, visuals and dance.

“Transcriptions” offers a contemporary and original interpretation of the work of Fryderyk Chopin. Its intention is to reflect the special mood and emotionality of the composer’s music, his artistic independence, and an openness to a variety of influences. The interactive, sound and movement sensitive, visuals form an important part of the performance.

In choreography the performance adresses questions of identity, and the (in)ability to create fruitful selves in private as well as in dialogue with the other. Chopin’s definition of an unrelenting feeling of suspension between happiness and its lack, taken from his letter to his friend, Tytus Woyciechowski, became one of the inspirations in the piece.

“Chopin, electronic music and cello –  this is an explosive mixture, it seems. You may try to say after one of the characters of Milos Forman’s “Amadeus”: “ Too many notes.“ Yet, there is neither unnecessary tune, nor redundant movement in this performance.” 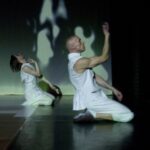