The dance in Solo on Bach & Glenn is based on a written score, a series of
instructions for the dancer created in close relationship with the soundtrack
(Glenn Gould’s explanations about his way of playing and his recorded
Goldberg Variations). 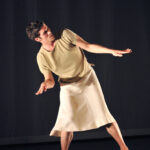