In STORM END COME the performers embark on a journey of fluid and unpredictable mental states, which lead them to meetings and interactions in shifting environments. Within this unstable atmosphere, the work unravels a world which looks at one’s assumption of “self” as it is challenged by the basic fear of non-existence and of disappearing into someone else, alongside the attraction and alarm of transformation. Within this conundrum, there is still the need to reach small climaxes, expose moments of personal expression, and be a witness of someone else’s intimacy. Embodying all of this, the work looks at the struggle to rebirth ones’ identity through a series of personal, collective and animalistic sequences; A kind of heroic, pathetic and vulnerable insistence to define oneself, hindered by the need to submit to elements which are beyond our powers.

Greedy mouths, swaying hips, arched backs. Grimacing faces, contortions, convulsions. The impeccable set design of Storm End Come evokes not so much a psychiatric ward as a blank canvas upon which life is to be written. Driven by socially incorrect impulses, six bodies and their unruly limbs speak a language of animal instinct. The desire for contact involves existential angst, encounters with the self and with the other, each subject to constantly changing moods, split identities and dark desires. A green sun reddens before becoming the full moon. Humanity is reinvented in the extreme vulnerability of its animal beginnings. 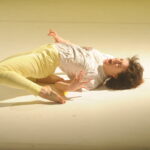 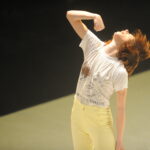 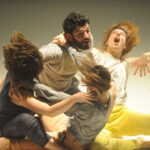 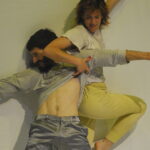 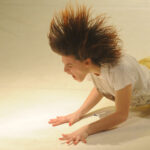