Solo performance reflecting the experiences of Ukrainian people since February 24.

Is there an instruction on how to abandon your whole life and leave?  Suddenly.  How to pack a suitcase when you don’t know where and how long you are going for. Because you are not going TO, but FROM.

Director and performer, Rita Lira, who was forced to move from Ukraine, created a performance based on:

Interviews
Rita took interviews from real people who are from or have been to the deoccupied territories after the invasion of russian soldiers.

Music
The majority of the sounds for this performance are documentary recordings.
Rita recorded on her phone almost everything that happened around her during her stay in Ukraine in the first days of the invasion.
All music for this performance was created without the use of professional equipment or studios.
Composer Maryana Savchenko recorded vocals for a choir in a hotel bathroom in China. Singer Pavlo Moskalenko recorded his vocals on a telephone recorder in Ukraine.
Mariana Savchenko: For me, the main challenge was that I could not see the movements and had to work intuitively.

Movement
The performer conveys the feeling from the first emotions of absurdity, confusion and horror through pain and loss to the present strength, pride and insurmountable struggle for life, peace and freedom!
The movement of the performance is always in a free form, which makes each showing of this performance unique.

Rita: I decided not to work with exact choreography because this performance is not about beautiful dance. This is a real story of real people, and for me only improvisation at the moment of each part can create and convey true emotions. 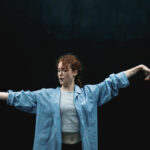