Courtney May Robertson: the pleasure of stepping off a horse when it’s moving at full speed

As a starting point for this short solo, Courtney May Robertson takes a metaphor for self-control; a rider taming a wild horse. She looks at the struggle between embracing one’s true desires, and regulating behaviour in accordance with societal pressures. Visual projections encapsulate Courtney within an octagon spanning 3.5m in diameter. Through a combination of poetry, dance, and song, she travels across landscapes of personal desires, memories, and conflicts.
The space acts like a time capsule; intimate home videos are spliced with samples from YouTube, documentaries and old films. the pleasure of stepping off a horse when it’s moving at full speed is Courtney’s attempt to embrace the, sometimes messy, contradictions that make up a multifaceted human.

With the utmost aesthetic simplicity, this choreographic solo, based on urban dance, questions the very possibility of happiness in the face of the world’s chaos.
When the New York Times journalist Sam Anderson knew about the death of the last male Northern White Rhinoceros, he took a flight to Kenya to observe and narrate in detail the daily lives of the last two female representatives of this species, which would disappear from the earth once they had died. The image of these individuals in ignorance of their species’ fate gave the reporter a sense of peace, at a time of global uncertainty.

Gastón Core seeks, through a formal investigation of different styles of urban dance (Krumping, Finger Tutting, Waving, Afro …), to offer the image of the Man –the dancer Oulouy– who dances because he has discovered that, as Paul Valéry puts it, we have “too much energy for our needs”. That is, to present dance as excess, as a celebration derived from life. Dance to exhaustion, dance to the end because maybe there is nothing more that can be done. 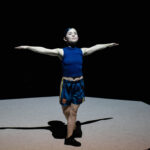 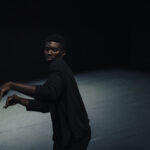 The performance Courtney May Robertson "the pleasure of stepping off a horse when it’s moving at full speed" includes strobe effects.